It's that time again... new pattern time! Meet Pom-A-Rama, the slippers with pom-tastic toes. I loved making these babies, and they inspired me to learn some new techniques to make these joyful embellishments. 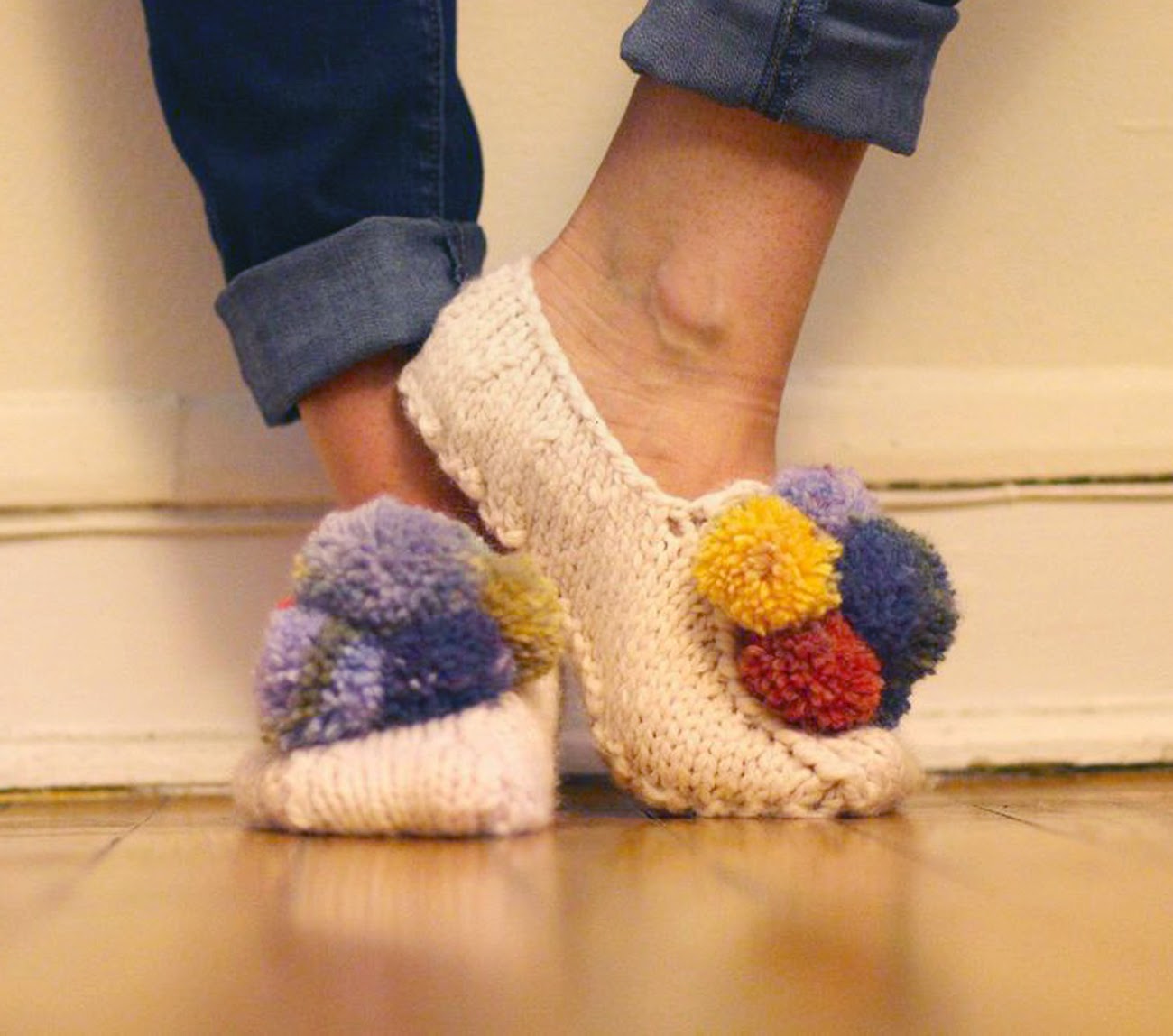 For this stop on the Holla Knits Accessories 2014 Blog Tour, we're talking all things Pom pom.

Essentially, pom poms are tight bunches of yarn tied at the center and trimmed so they have a circular appearance. They can also be snipped into other shapes, such as these amazing fruit poms by mrprintables (there's a tutorial in the link!):

These pretty much blew my mind, and I've yet to try to make them. If you attempt some fruit pom poms, let me know how it goes!

A cool thing about pom poms is that you can make them all sorts of ways-- with or without a store-bought pom pom maker. I'm going to test out a few ways to make them, after poking around on Pinterest for ideas. In my previous pom-making attempts, I've used both the "cardboard donut" method and the plastic store-bought gizmo method. These are both good ways to do it, and have their little quirks and drawbacks like anything slightly fussy. As with anything yarn-related, yarn choice is very important to the outcome, as is keeping tension consistent when you're wrapping.

Let's try some other pom-making techniques!

1. Tiny Poms with a Fork


This was surprisingly simple. It felt easy to wind the yarn around a fork, and the tines provide a nice even place to slip the tying yarn through the middle. I had a little trouble cutting the yarn while it was on the fork, but then I looked at the directions again and she did NOT cut it on the fork... so. There you go.


The resulting pom was a little oblong and required lots of trimming, but it's cute and worked pretty dang well.


2. Giant Pom with a Whole Ball of Yarn

I should have known this was going to be a disaster. Yarn choice is EVERYTHING when knitting and crocheting... and yet, I picked mohair to make this pom pom. Mohair.

Let's learn from my mistakes, shall we?

This technique requires you to sort of finger-comb the yarn out from the center and trim it until you have all the strands roughly even. My Mohair Monstrosity was so sticky and fuzzy that I could barely get my fingers through it. What followed was about 45 minutes of frantic pulling and frustrated laughing while I chopped at the fuzz.

I gave up after it became evident that the most I could hope for was a demented Tribble-esque creature. I got halfway through and decided it needed a face to reflect this hilarious epic fail. You're welcome, world!

It should be said that this pom-tastrophe was 100% my fault, and does not reflect a problem with the technique. I want to try this again with a more appropriate yarn, but don't currently have a ball on hand that is this shape and not already spoken for.

My first thought was "this seems like a great way to cut off your circulation," but fortunately no fingers were severed in the making of this pom pom. 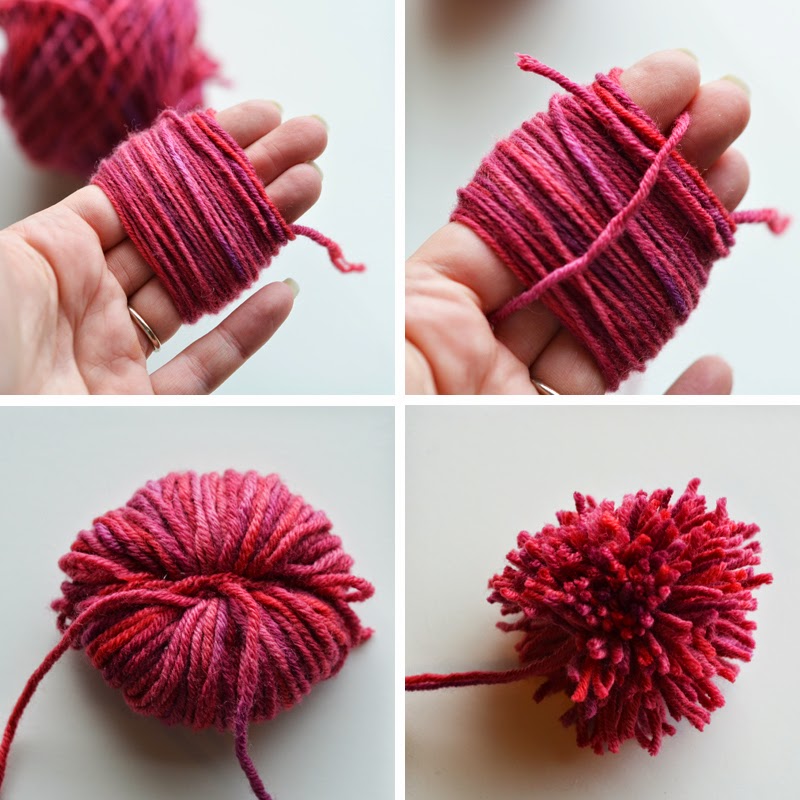 While at times it felt like I might need another hand to pull this off (PUN INTENDED), the pom came out pretty sweet. Getting the wrapped yarn off my fingers was a little tricky, as was tying the yarn evenly around it, but overall this is a pretty solid in-a-pinch method.


That's a wrap, folks. I hope you enjoyed this foray into the fuzzy world of pom pom making!

Pardon me while I go vacuum bits of mohair out of my everything. 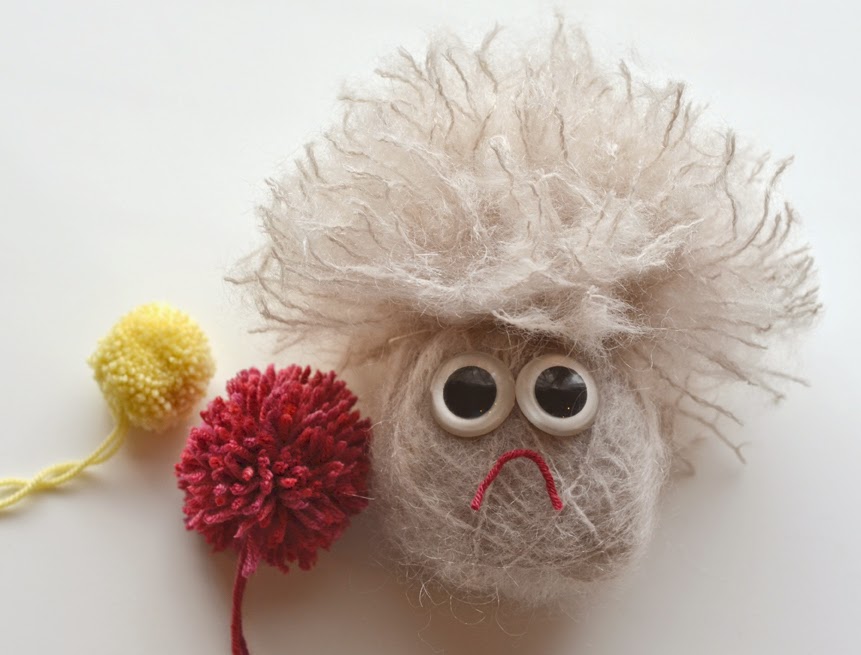 Check out the Holla Knits Accessories 2014  collection, and the blog tour including some awesome giveaways!

Thanks Kate! I am quite pleased with it now, but at the time it was a curse-worthy frustration. It did turn out pretty funny.