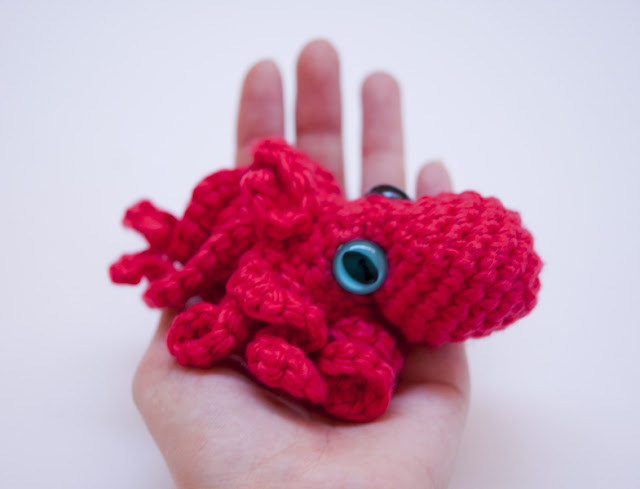 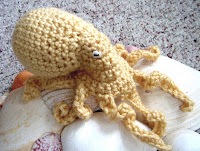 When I first set out to crochet a realistic octopus, over five years ago, I had no idea what this cephalopod-fancy would become. The first octopus was yellow, with an oblong head and tiny eyes. I gave it to my dad for his birthday. He put it up in his first grade classroom, on the wall above the "O" in the alphabet. It was a hit.

On a whim, I made another and posted it on Etsy. 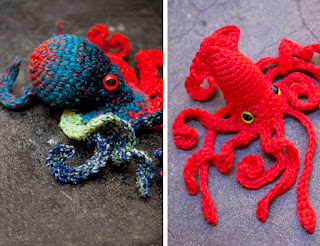 Many years (and 1,000 crochet octopus arms and squid tentacles) later, I had sold hundreds of the little handmade creatures, and was getting frequent requests for a pattern.

This was before I even knew how to read a crochet pattern. At the time, it seemed far-fetched. Still, as much as I loved making the animals, turning the grunt work over to enthusiastic hookers was a very appealing idea.

So I got serious and learned the lingo, and cooked up this octopus pattern, and soon after, this squid.


Seeing the realistic creations flow from the hooks of crocheters across the internets (which was so freaking cool), I got to thinking about the balance of cute and realistic. I prefer the cephalopods to look more true-to-life, but there is something irresistible about a tiny, giant-eyed squiddy creature.

While those previous patterns hover between anatomically correct and adorable, this one was made for pure squee-factor. Both octopus and squid are written to be crocheted in 2 pieces, so there is minimal sewing. They're fast, easy and use little bits of yarn. If you can single crochet and work in the round, you can do this! There are lots of step-by-step pictures to guide you along.

I hope you enjoy these little creatures as much as I do! 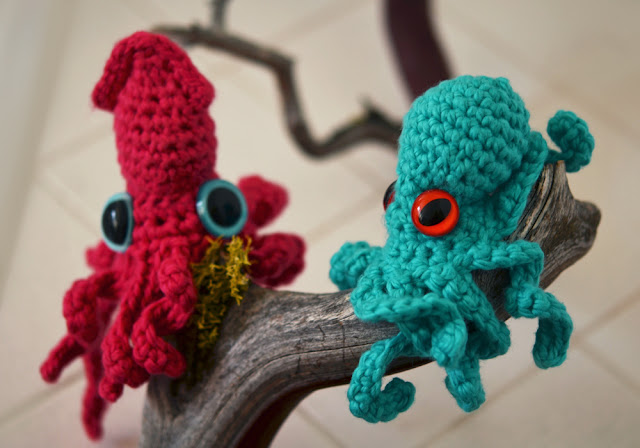 Hi, that's a lovely pattern but I'd like to know what multi-colored yarn is that! It's lovely!! Thanks!

Hi, Aileen. I would like to know where to purchase the eyes. Thank you.

Hi there! Been searching all over this morning, still can't figure it out. Where do you get those tiny cat eyes (specifically on the octopuses)? I'm afraid to buy the pattern and then I can't find any tiny cat eyes to perfect the project. Thanks!

Those of you still looking for the craft eyes, I got the eyes from https://suncatchercrafteyes.com/