Ever since watching Twin Peaks for the first time years ago, I have wanted to design a collection based on the amazing sweaters worn by the female characters. I know I am far from the only knitwear designer to have had this same impulse -- when I've mentioned this idea to other industry people who are familiar with the show, they will say something along the lines of "Oh my gosh-- I almost did that!"

Twin Peaks is beloved by knitters for many of the same reasons that made it a cult classic. It was a groundbreaking show when it came out, incorporating cinematic and thematic elements into a weekly tv show in a way that was new and incredibly exciting. David Lynch's vision was fully realized with his team-- the attention to detail in characterization, wardrobe, cinematography and all aspects of production was impeccable. The show is hilariously funny, horrifying, truly bizarre and touching, often in the same episode.

And then, there are the sweaters.

Since I was late to this party (I was 7 years old when Twin Peaks originally aired), watching it a few years ago was like a shock to my system. "This show is AMAZING and it's been around this WHOLE TIME and I didn't know about it??!" I felt cheated of all the years, especially in high school, when I could have used some Agent Cooper, Audrey, and Lynchian weirdness. I saw the David Lynch movies that I could when I was younger, but somehow the show eluded my grasp. I knew it existed, but I didn't know what I was in for.

All of this is to say that I respect the legacy of the show, and I have given this all a lot of thought. Some of the sweaters I'm working on have been cooking in my brain for many years.

I waited until I had designed a number of sweaters and was confident in my garment design before attempting to put this all together. Around the time I started kicking this around in my head for real, Teresa Gregorio reached out to me about doing a collaboration. This turned out to be fortuitous timing, and she fully got on board when I explained my idea. Teresa's design aesthetic is playful, feminine, and incorporates fun colorwork and textures into fantastic designs-- basically, we're a great match to design a collection together.

After about a billion emails, Teresa and I finally met in person at TNNA last month. We schemed, sketched, filmed, and made lots of lists. 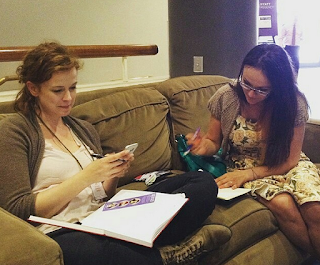 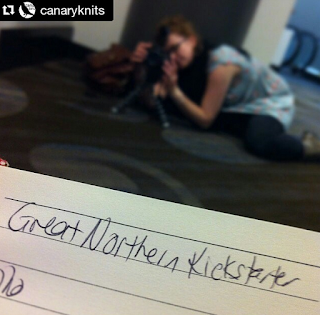 We're working on a Kickstarter video and will launch the fundraising this summer. We will release the collection in Fall 2016! Great Northern will include 10 sweaters and a number of accessories and home goods. We will publish the collection as an e-book AND a print book, which we are very excited about!

It should be said that the sweaters will not be direct knock-offs of the show wardrobe. We are taking the silhouettes, textures and styles of our favorite sweaters and made them our own, while still keeping the style intact-- Audrey, Donna, Norma, the Log Lady, Maddie and Lucy would be proud to wear them.

So, stay tuned! We're using the hashtag #greatnorthernknits to give you glimpses of what we're working on until we release the video! We've also got a simple website where you can sign up for our newsletter for updates. I hope you do!